WINGS Regional Meeting on Latin America and the Caribbean

Multistakeholder dialogue in Nigeria ahead of their FATF evaluation onsite visit

Spaces for Change convened a multi-stakeholder meeting in Abuja on June 20 on the issue of terrorism financing (TF)/money laundering (ML) risk in the NPO sector. Nigeria is in the process of preparing for its FATF Mutual Evaluation, with an onsite visit scheduled for September 2019. Ahead of this, Nigeria published a National Risk Assessment for TF and ML (completed in 2016), which identified Designated Non-Financial Businesses and Institutions (DNFIs), of which NPOs are a subset, as being amongst those sectors most vulnerable to ML/TF.

Spaces for Change came out with a report earlier this year challenging the assessment of risk for the non-profit sector. Titled Unpacking the Official Construction of Risks and Vulnerabilities for the Third Sector in Nigeria, the report sought to dispute the official classification of NPOs as DNFIs and to tease out the nuances between vulnerability and threat, among other issues.

The meeting in Abuja was a logical follow-up step. Engagement with various governmental actors and the FATF-Style Regional Body for West Africa, GIABA, is key to greater understanding around issues of NPO regulation and oversight, so that any mitigating measures put in place as a result of the Risk Assessment or following on from the Mutual Evaluation are effective, proportionate, and do not impact legitimate NPO activity.

In the room on the 20th was a diverse representation of civil society from across the country (there was representation from every region of Nigeria). The leadership of SCUML (the FIU for DNFIs) was present, Director down, including the consultant who oversaw the Risk Assessment process. GIABA was represented by the head of the Nigeria office, and there were representatives of various government ministries (Justice, CAC, Finance).

In what was a fruitful exchange of views, the Director of SCUML said that partnership was NPOs was key to fighting ML and TF, and that there is a mutual and symbiotic relationship between the sector and the state. He welcomed questions from NPO participants and encouraged NPOs to participate in the FATF Mutual Evaluation process. The Spaces for Change Director said that civil society is an ally of the government when it comes to tackling ML/TF, and is willing to comply and engage, but that the issue of shrinking civic space as a result of additional compliance and oversight burdens cannot be dismissed. She emphasised that while the objectives of both NPOs and the government were the same, the two were often working at cross purposes and that there was a need to bridge this communication/action gap, of which this meeting was a possible first step in doing so.

HSC, speaking for the Global NPO Coalition on FATF, emphasised the risk-based approach – the fact that any credible risk assessment has to identify the sub-set of NPOs most at risk of being abused for TF. The need for government outreach to and engagement (sustained, continuous) with the sector was a point strongly made. Also outlined was the impact of over-broad regulation and oversight, which is not risk-based, on the operational space of NPOs, impacting, among others, the freedoms of expression and association, the financial inclusion agenda, the rollout of the SDGs, the PVE/CVE agenda and effective programming in general Given the complexity of the institutional framework in Nigeria for NPOs, as shown in the diagram below, many NPOs present in the room had questions about reporting obligations to the various entities, around which much confusion still remains within the sector. More outreach on this from the side of the authorities is clearly called for. As follow up, the following have been suggested:

• To send the Spaces for Change report on the NRA to the FATF Secretariat in Paris ahead of the onsite visit, so that the Mutual Evaluation assessors can read it

• To further investigate issues of bank de-risking/financial access issues for NPOs as a result of AML/CFT rules and regulations, and in light of the financial inclusion agenda of the government

Ahead of this meeting, Spaces for Change had convened a meeting of key civil society representatives at the Abuja office of Amnesty International on the 19th to discuss the key issues that civil society needed to raise the following day and agree on a common strategy. There was much discussion about whether there was need for dedicated regulation of NPOs or whether effective regulation was better, with the consensus being that the latter was, indeed, the preferred option. HSC and Spaces for Change also met the Director of SCUML in his offices on the 19th. All in all, this was a positive, much-needed engagement process that Spaces for Change has catalysed and that, if sustained, can lead to greater understanding on all sides and more effective and proportionate regulation/oversight of NPOs than is currently on the table. 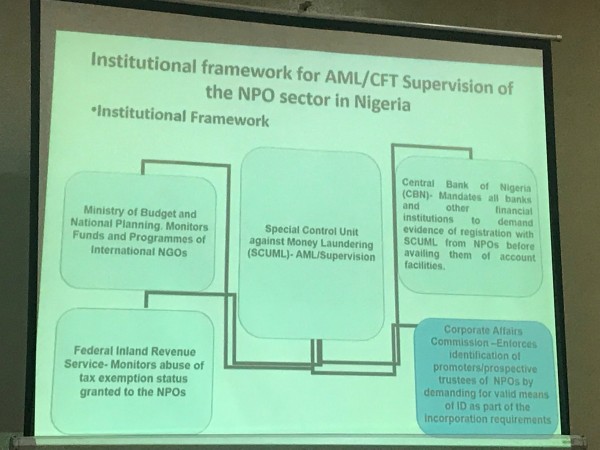